How will New Zealand fishermen respond to Hookpods—insights from a fisherman.

Editor’s note: This post is the second part of a two-part series aimed to bring you behind the scenes of an emerging fishery technology. The first post comes from the perspective of a scientist—it explains the Hookpod technology and its conservation benefits. The second post is written by a fisherman who describes his experience with an emerging technology implemented in the 1990’s. He offers his thoughts on how the new Hookpod technology would impact and benefit fishermen. These two posts are an example of stakeholder perspectives that fishery managers consider when making decisions.

In the late 1990’s, the Alaska fishing industry came under intense pressure to change fishing practices to mitigate bycatch mortality of seabirds in longline fisheries. Under threat of fishery closures, the fishing industry responded and collaborated with scientists to test a Japanese invention – the tori line. In 1999, I volunteered myself, my crew, and my fishing vessel – F/V Quest – to assist in this research by providing a working platform for scientists (including Ed Melvin) to establish standards for a wider experimental test of tori lines. The outcome of the research resulted in the establishment of fishery regulations requiring tori lines. Immediate results showed tori lines reducing seabird mortality by 74% (sablefish fishery) and 93% (P. cod fishery).

While the action taken in the 1990’s to reduce seabird bycatch was driven by political/environmental forces – that is, the threat of fishery closure, the Hookpod and other hook shielding devices address those forces as well as an additional economic force affecting fishermen – loss of gear effectiveness, or operational loss. Hooks that catch seabirds lose money.

At first glance, and without testing them myself, I’m guessing that many New Zealand fishermen with hook turnover rates in the range of 3,000 hooks per day will invest in the Hookpod at $6/unit. I can see where a $18,000 investment might pencil out an operational loss and may be manageable in New Zealand.

In Alaskan fisheries, much higher hook turnover rates are the norm (e.g., 20,000 hooks/day for my vessel and >50,000 hooks/day in the P. cod fishery). Alaskan fishermen don’t experience a significant operational loss due to seabird activity. Given the success of tori lines in Alaska in mitigating seabird bycatch, and given initial investments that could exceed $300,000 (not counting maintenance costs), it remains to be seen if Hookpods have a place in the North Pacific.

However, Hookpods seem to be a clever and effective solution for reducing mortality in Southern Ocean seabird populations, while at the same time increasing catch production for fishery target species. I could envision a public/private subsidy for assisting fishermen to invest in these devices.

Dean Adams captained the longliner F/V Quest for 28 years in Alaska before retiring in 2007.

In the first part of a two part series, Ed Melvin describes an emerging fishing technology that will save thousands of albatross.

We talk to Cody Szuwalski, research fishery biologist at NOAA about recent crab collapse in the Bering Sea, Alaska.

Recent paper: the most effective way to consume a low impact diet is not vegetarian or vegan, but one that contained specific types of fish.

Biden’s 30×30 plan is out. What does it mean for fisheries? We breakdown stakeholder responses and look to the future. 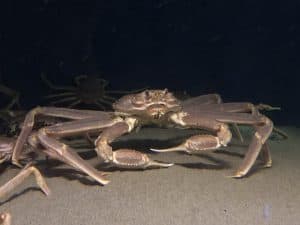 We talk to Cody Szuwalski, research fishery biologist at NOAA about recent crab collapse in the Bering Sea, Alaska.

Recent paper: the most effective way to consume a low impact diet is not vegetarian or vegan, but one that contained specific types of fish.

Biden’s 30×30 plan is out. What does it mean for fisheries? We breakdown stakeholder responses and look to the future.