Why we should be anxious about this fishery in 2019

In February, a much-anticipated Atlantic striped bass stock assessment was presented to the Atlantic States Marine Fisheries Commission (ASMFC). The preliminary results were incomplete due to the government shutdown, but the outlook is bleak on a fishery well-known for its recovery in the early 2000’s. With numerous fishery news outlets reporting on this story, we wanted to provide a historical perspective on the fishery and offer some considerations for policy makers on how to more effectively manage this resource going forward.

Atlantic striped bass (Morone saxatilis) has been a vital commercial and recreational species on the Atlantic coast of the United States since colonial times. Some scholars think striped bass was the main course at the first Thanksgiving dinner, not turkey. There is even evidence that striped bass sparked the first fishery management law in the American colonies; in 1639, Massachusetts forbade the use of striped bass as fertilizer because it was, “too delicate and fine for such a use.” As the fishery grew, management challenges mounted, partly due to the migratory nature of this species—they move north/south along the Atlantic coast seasonally to stay in waters 55-68 °F. For this reason, striped bass were a driving force in the creation of the ASMFC, a fisheries management body signed into law by executive order 32 years before the Magnuson Stevens Act (MSA).

Yet in the post MSA-era of US fisheries, few species have seen more fluctuation than striped bass. The fishery collapsed in the 1980’s and 1990’s, enjoyed a remarkable recovery in the early 2000’s and earned “Best Choice” certifications from Monterrey Bay Aquarium’s Seafood Watch program for the past 18 years. Striped bass remained a shining example of how effective fishery management can recover even the most complicated, depleted, marine resource. From a management perspective, this fishery has it all—complications between state and federal authority, temperature dependent / seasonal migration patterns, a powerful recreational fishery lobby, and it’s a key piece of the sensitive food web in the Chesapeake Bay.

But in light of this most recent assessment, with the final report on the stock status coming in May, managers are seriously concerned about the outlook of the next few years. Female spawning stock biomass (SSB) has been dropping since 2012 and will fall below the target threshold for the first time since 1995, if the preliminary assessment holds true. (Figure 1). The threshold is 91,436 metric tons, and the assessment estimates the SSB fell to 68,476 in 2017. Recruitment hasn’t dropped at the same rate, but has waned.

This directly contradicts the ASMFC’s 2016 claim that, “the 2016 Atlantic striped bass stock assessment indicates the resource is not overfished nor experiencing overfishing relative to the biological reference points.” But piecing together various industry reports and ongoing studies provides a more complicated picture, even before the most recent assessment is released in a few months.

Female Atlantic striped bass are the primary target for sport fishermen, as they are much larger than their male counterparts. A striped bass over 15lbs is almost certainly female, capable of producing millions of eggs. For this reason, there may be a correlation between the declining female SSB and the increase in sport fishing mortality from 2000 to 2008. (Figure 2). Stimulating increased sport effort are the lucrative seasonal sport fisheries off the coasts of Virginia and North Carolina. In the winter months, large female striped bass reside a few miles off the coastlines of the southeastern Atlantic states while smaller males and juveniles remain inland. Additionally, these females tend to mass together in warm water pockets, making locating them easy. Coastal communities have taken advantage of these vulnerable fish, creating prize tournaments that have grown in popularity over the last few decades.

Since 2004, when recruitment was at 165 million age 1 fish, average striped bass recruitment has declined. It doesn’t seem to be directly correlated with female SSB, but both numbers declining simultaneously should raise concerns. It should be said that striped bass recruitment has historically been unpredictable, even in moratorium years. It’s reasonable to blame poor recruitment since 2004 on uncertainty alone, but 2012 yielded the lowest recruitment since the stock rebuilt. Some blame the addition of invasive species to key juvenile striped bass estuaries, namely those connected to the Chesapeake Bay. Estimates say that 70% of all Atlantic striped bass spawn in the Chesapeake Bay and its estuaries every year; and like the early 1980’s when environmental degradation was ravaging the Bay, recent invasive species have been disturbing important food webs. A likely culprit is the cownose ray, which isn’t technically an invasive species, but has recently appeared in record numbers in the Chesapeake Bay. This ray has no natural predators in the Bay, and prefers a diet of bivalves and crabs—precisely the foods juvenile striped bass need to survive.

Compliance issues on the 3nm border

As with many fish populations, Atlantic striped bass don’t abide by jurisdictional boundaries. The revered large female striped bass pursued in the winter tournaments have historically been within the 3nm range, managed by individual States. But, increasingly, these fish have chosen waters farther from shore in Federal water, leaving the sport fishermen in a legal predicament. Many anglers have chosen to sneak across the 3nm boundary into EEZ moratorium waters to pursue these retreating stocks. Data collection on this issue has been sparse, but industry stakeholders have been reporting these compliance issues for years. Apparently, it took the coast guard numerous attempts to crack down on violators, and only after an extensive undercover operation was justice served. Most recently, a number of Virginia fishermen were prosecuted under the Lacey Act for selling striped bass caught illegally in the EEZ. One violator is actually doing jail time for the offense, and there is reason to believe that this new precedent has been taken seriously in the recreational fishing community.

Historically, Atlantic striped bass have been tricky to assess because of their migratory nature and habitat range. Their range is dictated by water temperatures, which can be extremely unpredictable and vary seasonally. Most importantly, the closure of the EEZ to all striped bass fishing effort has meant minimal data collection outside the 3nm boundary. Again, fish don’t respect jurisdictional boundaries, and if a nice pocket of warm water exists 4nm from shore, striped bass will find it, while stock assessments may not.

Another possible wrench could be the complicated status of Atlantic menhaden (Brevoortia tyrannus). Menhaden are a critical food source for striped bass, especially juveniles in and around the Chesapeake Bay. Like striped bass, menhaden stocks are, “neither overfished nor experiencing overfishing,” according to the ASMFC, but the story is more complicated. The Commission will soon consider ecological reference points in their assessments (but not yet), which would be used to manage menhaden for their importance as forage and for their role in the greater ecosystem, rather than just as a species for harvest. Ecological reference points are expected to be incorporated in the next menhaden assessment in two years, but conservationists feel this is overdue. The Commission also tends to measure all menhaden in its jurisdictional range – from Florida to Maine – as one fishery. Landings and fishing mortality data thus do not illustrate the impact of localized depletion, which is a major factor in this fishery. Omega Protein, the industrial fishing company responsible for 80 percent of the coastwide menhaden harvest, is based in Reedville, Virginia and heavily seines close to home. As we explained before, the Chesapeake Bay is home to roughly 70 percent of all juvenile striped bass and they rely on these same menhaden stocks fished heavily by Omega Protein’s fleet. The Commission knows this too, and they have put conservative harvest caps on Virginia’s industrial menhaden fishery before, but Virginia has a history of appealing these caps which worries sport fishermen and conservationists.

Policy makers had plenty to consider before last month’s preliminary assessment, and now that the numbers are more damning than expected, considerable reductions are expected. John Clark, a board member of the Delaware Division of Fish and Wildlife said, “we know it’s going to be pretty drastic.”

The recreational striped bass fishing lobby is already using this assessment to advocate for abolishing the striped bass commercial fishery. “We need to do what we did the last time. Put a total moratorium on the harvesting of wild striped bass,” argued Dean Clark, a sport fisherman and board member for Stripers Forever. This argument isn’t anything new from the sport fishing community. They have been consistently lobbying for striped bass as a pure game fish since its last decline. A few states have decided to oblige, e.g. New Jersey banned commercial striped bass fishing in its waters and re-issued that quota as recreational permits.

But by many estimations, increasing the recreational striped bass fishing effort would be a mistake. Recreational fishing mortality has exceeded commercial fishing mortality since the mid 1990’s, and while sport fishermen might point to a recent decline in recreational landings, this recent assessment reports startling release mortality numbers not captured thus far (Figure 2). According to South Coast Today, “NOAA data showed that in 2006, recreational fishermen took home nearly 2.8 million fish but threw back 23.3 million striped bass. Studies estimate a 9 percent mortality rate for catch-and-release bass. That means more than 2 million dead fish.” It can’t be confirmed yet until the assessment is official, but some are saying that 2017 will reveal sport fishermen killed more striped bass than they took home that year. This, coupled with a previous policy to increase minimum catch size, may have led to a dangerously high mortality rate in small fish that were released.

Policy makers will have to navigate these politics while untangling all the new data in the final assessment. Whatever the outcome, new management strategies will be needed.

Jack has sourced, sold, cooked, and sustainably certified seafood over the past 10 years. In addition to his contributions to Sustainable Fisheries UW, he is working to increase traceability into supply chains and educate consumers, chefs and retailers on the value of environmentally sustainable seafood. He earned a Master's in Marine Affairs from the University of Washington in 2015.

Check out some of our other fishery features:

Atlantic Cod: The Good, The Bad, and the Rebuilding – Part 1

Atlantic Cod: The Good, The Bad, and the Rebuilding – Part 2 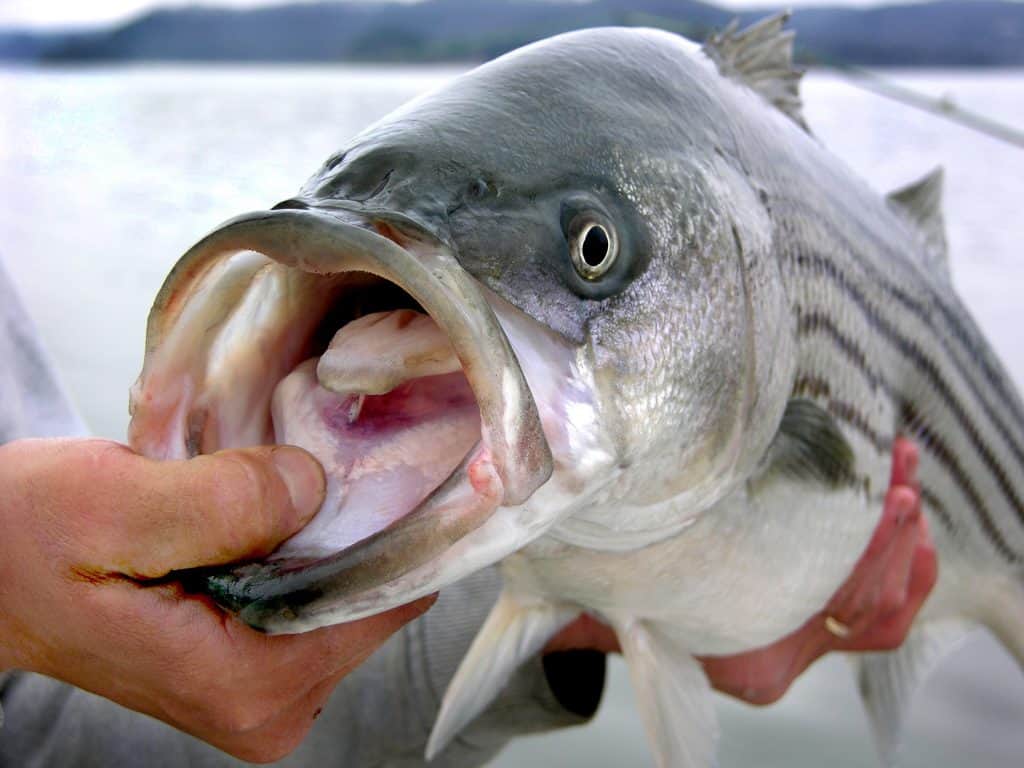 Atlantic Striped Bass: Why we should be anxious about this fishery in 2019

The Status and Potential of Europe’s Atlantic Fisheries – Part 1