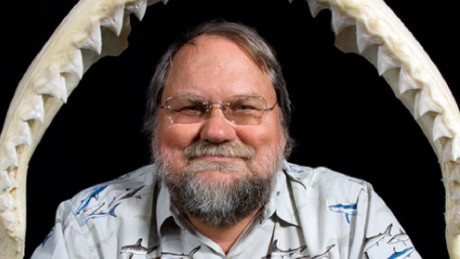 George Burgess, an ichthyologist and fisheries biologist, is the Director of The Florida Program for Shark Research (FPSR) and Curator of the International Shark Attack File and International Sawfish Encounter Database, both of which are headquartered at University of Florida’s Florida Museum of Natural History. George has studied fishes and elasmobranchs throughout the world. He serves as a Vice Chairman of the IUCN Shark Specialist Group and works with ICCAT and other fishery initiatives.

I spoke with George Burgess, the Director of the Florida Program for Shark Research about the status of shark populations and the sustainability of shark fisheries. “Sharks are classic ‘life in the slow lane animals’”, George says, meaning they are long-lived, late to reach sexual maturity and have limited reproductive potential. “As a result, when these animals are overfished, they’re recovery, even if done with proper fisheries management, is usually measured in decades rather than years” (00:34). This means sharks and their relatives the skates and rays are more sensitive to overfishing than most bony fishes, with the exception of some long-lived species such as rockfish.

Despite having overfished sharks on both coasts of the U.S., management measures put in effect over the last decade or so are allowing recovery of most of these species. “But,” George cautions, “some of them are still two or more decades away from getting back to the levels that we might like them” (02:40). This leads to the question: Are these shark fisheries sustainable? “The answer to that question is yes they are, but they are sustainable at levels lower than perhaps folks would like in the fishing community” (04:02). George believes that the fishing sector has learned its lesson multiple times with ‘boom and bust’ fisheries, and having heavily fished elasmobranch stocks that then suffered the inevitable crash, “we should be smarter now and be able to manage in a sustainable way, just at lower levels than what we have in the past” (04:28). George attributes the U.S.’s poor track record of demonstrating long term sustainability to the development of fisheries before the management; “we’re closing the barn door after the horse has gotten out” (07:28).

When it comes to management, “every species of shark and ray has its own demography and needs to be regulated according to its life history parameters” (05:00). Early attempts at management in the U.S. considered sharks as a single unit. Once shark populations began crashing, “the scientific world came to the sad realization that we were decades behind getting the information we needed on a species-by-species basis” (05:25). “Shark biologists have been playing catchup for the last couple of decades, and we’re now starting to get better and better information. Models and so forth that are traditionally used in developing appropriate fisheries management measures are now becoming more species-specific and a lot more useful” (06:20).

With this in mind, what does a sustainable shark fishery look like? According to George, spiny dogfish “are particularly suitable for good fishery management because they are found in large numbers and they have high economic value.” Spiny dogfish fisheries “have traditionally been very valuable for their flesh, which is highly prized particularly in western Europe – it was the staple for fish and chips for years” (07:50). When the fishery off the NE Atlantic became overfished due to demand of the many fishing nations of Europe, “a fairly large fishery developed off of the U.S. coast for export, and the inevitable result was that we did the same thing that the Europeans did – we didn’t learn from their mistakes, and those populations declined dramatically” (09:12). The stock has been rebuilt due to stringent management implemented in 1998 after NMFS declared spiny dogfish overfished.

Other sharks, by contrast, are found in less dense populations and are targeted not for their flesh, but for their fins, which are sent to Asian markets to be made into shark fin soup. “Economically, on a pound-for-pound basis, I do believe that shark fins are worth more than any other fish outside of bluefin tuna. That’s the economic motivator for shark fisheries” (11:25). These sharks are often not specifically targeted. Instead, they are caught as bycatch of other fisheries, most notably open-sea fisheries where international waters are not regulated or enforced, such as tuna and swordfish fisheries. “The fins from these sharks are now the icing on the cake for fishers in those fisheries. Formally considered just a pain in the neck,…[fishermen] generally cut them off [the line] and threw them back overboard dead or alive; they now have intrinsic value dead for their fins” (12:02). In some quarters, fishers began to save the fins and discard the carcasses – often alive but sans fins, a wasteful and inhumane practice known as “finning.”  “Happily, there’s been a lot of action on both national and international levels to curtail that activity. Most countries now have anti-finning regulations which are usually enacted by having the correct number of fins landed with the correct number of carcasses” (12:55).

What does this mean for the future of shark fisheries management? “Most species of sharks are highly migratory, so they don’t honor geopolitical boundaries. The problem with fishery management of sharks like other highly migratory species is that they require international conservation and management. Much like bluefin tuna, there’s will be a lot of contention on how we manage these animals on a global basis because so many species are cosmopolitan. It’s hard enough to get agreement among biologist from one country…but now you throw in multiple countries in different languages and different cultural morays and so forth, so you have a more complex situation” (15:50).

The fastest fish in the ocean are speeding toward sustainability

Oceanic tunas, billfishes and some sharks are showing great improvement in their IUCN Red List conservation status but more work is needed.

The fastest fish in the ocean are speeding toward sustainability

Oceanic tunas, billfishes and some sharks are showing great improvement in their IUCN Red List conservation status but more work is needed.